The economic crisis of Alzheimer’s is bearing down on Americans, and the Senate health care bill only makes it worse. It targets the most vulnerable Americans, those the President vowed to protect, and threatens to take away critical protections that make the burden of Alzheimer’s just a bit more bearable.

This bill makes devastating cuts to Medicaid – a program that more than one in four seniors with Alzheimer’s or dementia depend on for long-term nursing home care, community care and other critical services. It could roll back critical protections for people with preexisting conditions, including Alzheimer’s and dementia. And it allows insurers to charge older customers far higher premiums.

We encourage you to use the below language to raise awareness of the impact of the bill on the Alzheimer’s community, particularly those from low-income households.

Twitter
The Senate health care bill would make the Alz crisis worse. Tell your senator to oppose it by calling 202-244-3121

More than 1 in 4 seniors w/ Alz depend on Medicaid. The GOP’s proposed cuts would do devastating harm. Speak out: http://bit.ly/2ueI9c1

Facebook
More than one in four seniors with Alzheimer’s or dementia depend on Medicaid. But the health care bill currently under consideration in the Senate would make devastating cuts that could leave people with Alzheimer’s and their care partners without access to the care and support they need.
We all need to speak out now. Add your name to tell your Senators to oppose this bill: http://bit.ly/2ueI9c1

The Hill Op-Ed: Medicaid cuts will be disastrous for millions with Alzheimer’s

Facebook
http://bit.ly/2sZWtYy
“Policymakers should ask themselves this question before acting rashly: will a radical change to Medicaid better prepare us to address our nation’s Alzheimer’s crisis?”

http://bit.ly/2sZWtYy
“If enacted, the AHCA would represent the most significant rollback of LBJ’s Great Society programs in their history, and would have tremendous consequences for low-income Americans struggling with Alzheimer’s and related dementias.”

Today, CaringKind is proud to announce that it has joined an initiative called It’s About Time, a public awareness and advocacy campaign that will run between now and the end of the year in which individuals will provide firsthand accounts of how Alzheimer’s disease has impacted their lives,calling on public officials in Washington to do more.

It’s About Time is collecting letters and short videos from regular people talking about how Alzheimer's has touched their lives. It’s About Time will then send these letters and videos to your U.S. Senators and U.S. Representative. It is our hope that this collection of personal stories will help encourage our leaders to make Alzheimer’s disease the top healthcare priority in 2017 and beyond.

Please visit the It’s About Time website and take a few moments to voice your experience and be sure to spread the word! 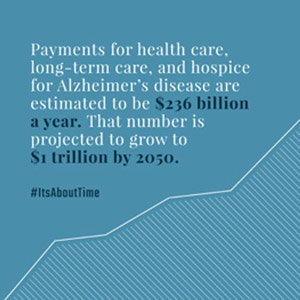 Click here to Learn more about our Year in Review.