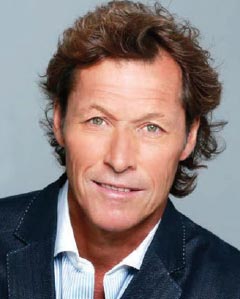 Lou-Ellen Barkan (LEB): Ron, thanks so much for talking with us about the challenges facing your family when they were taking care of your mom and dad. When did they first realize something was wrong?

Ron Duguay (RD): Mom was so protective of dad that she allowed almost two years to pass without saying much of anything to us. She tolerated his forgetting, his talking of the past and the other odd things he said and did. Two years into this, my sister got a call. Mom said, “You need to come over. Dad thinks I’m his mother.” That was also my sister’s first call to me. At the beginning, mom didn’t have patience, because she didn’t understand what was going on or what dad was going through. She thought he was just being silly. And she protected him for a long time.

LEB: My dad had always been absent- minded, so it took us a while to figure out that there was more going on. At what point did your family decide to get medical help and an assessment?

RD: One Valentine’s Day, at midnight, dad woke up out of deep sleep and realized he hadn’t gotten mom a gift. He got in his car and drove off to get her favorite box of chocolates. Two hours later he had what was, fortunately, a minor accident. My sister got a call from the police at 2 AM. That was the tipping point for us, but it took six months to get dad to the doctor, have an exam and finally get a prescription.

LEB: Did you feel confident that he was seeing the right kind of doctor?

RD: Absolutely not. I wish I had done more. It was the middle of my season, so I relied on my sister. The medical system in Canada is different, so dad saw a general practitioner first and, in Canada, they aren’t qualified to do a whole lot. It took another year to get him medication.

LEB: Was the medication helpful? Were there other strategies that helped him and reassured your mom?

RD: This is where it gets complicated. Mom was at the beginning stages of dementia herself, so my sister and I started to visit more often. When we arrived, we would find medication on the kitchen table and we would remind mom. “Dad needs to take this.” She would cover up for him. “Well, he doesn’t want to take it.” Or, “He forgot to take it.” After another six months of not properly taking the medicine, a whole year passed and the disease progressed.

This was even more complicated because breaking up mom and dad felt like breaking up twins. Neither had any interest in moving apart to get better care. But after another year, my mother was weaker and fell off a chair. When we took her to the hospital, we decided it was a blessing because the door was open to move dad into a hospital or nursing facility.

LEB: Your sister sounds like a superhero! I’ll bet both of you have good advice for other families.

RD: At my dad’s funeral, I called my sister an angel for all she did. Of all the kids, she was the one left behind to care for mom and dad. And even though it was extremely difficult, she never complained. I learned more when we started to share some responsibility. The one week that I took care of dad alone was the hardest week of my life. My advice to other families is, the minute you see early signs, find a way to take them to the best specialist you can find. That way, as soon as you have a diagnosis, you can make changes in their life and in yours.

LEB: When my dad was ill, my mother had to go unexpectedly into the hospital for a week. I didn’t have any help and my dad was a big guy. I couldn’t lift him. I couldn’t change his diaper, I couldn’t take care of him. And, although I thought of myself as a competent adult, I was very upset. Until I got someone in the house to help, it was one of the worst weeks of my life. I sure learned about the challenges of caregiving. How did it work when your mom returned home?

RD: We had seen what happened to my dad, so we moved very quickly to find the right place for mom. She moved back home for a bit, but as we saw her dementia progressing, we knew she should be in a safer place where she could have her own rooms, good nursing care and the company she loves. Within two months we found a good place and she is happy there today. This move was also very helpful for my sister.

LEB: What kinds of strategies worked for your sister? How did she stay healthy during that stressful time? Did she have kids who helped? Did the whole family pitch in?

RD: She spent as much time as possible with our parents to make sure they were safe. That meant she spent a lot of time at their place. She gave up a lot of her own life until things stabilized.

LEB: And what about the rest of the community? Were there friends and neighbors that helped?

RD: My parents were so private and dad’s whole life was his wife. So, the community was not involved. It was my sister who took this on.

LEB: Caregiving is often the role of the woman in a family. In our case, my brother was helpful, but left the decision making and care up to me. Women bear a lot of the burden and often with a good spirit. I worry about families where there are no daughters.

RD: Men can do physical stuff, but the mental and emotional issues are usually best left to women. When you need someone who’s sensitive and caring, you’re not going to necessarily turn to a guy.

LEB: Let’s talk a bit about lifestyle. We’ve been following the work of Dr. Richard Isaacson, who is doing some fascinating work on lifestyle, including the impact of diet, exercise and social engagement.

RD: I see people in the gym looking at themselves in the mirror. They’re putting in time caring for their physical body, but they’re not thinking, “How do I care for my brain?” Today we know much more about the effect of nutrition, hormones, vitamins and sleep. Five or six years ago, when I was tired and felt like I was losing the joy of life, a doctor tested my brain chemicals with a simple saliva test. He was able to treat me very successfully. I felt so much better and more engaged.

LEB: We underestimate the importance of keeping our brains active. Some folks think it’s about playing games, but the most impactful form of social engagement is a good energetic conversation like the one we are having right now. You’re animated in a conversation with a real-life person in a way that you can’t get be just doing a crossword puzzle.

RD: You might have an interaction where you are frustrated, but you are still engaged. Or, even better where you laugh and feel good.

LEB: When my father’s dementia began to progress, my mom used to keep him alert by telling him stories about their life together and these made him laugh. When I would visit, he could talk about his life playing baseball or tell us WWII stories. At the end of a couple of hours, he was animated emotionally and mentally and could walk up and down the beach with more energy. It didn’t change the progression of his illness, but it certainly helped his quality of life.

RD: When I had that dull feeling, I didn’t want to share or talk to anyone. If I had a story to tell, it was short. But once my brain was happier, the storytelling became better, a little bit more colorful. And it’s was just the joy of life returning. I really had to pay attention to this. In my work, I’m on Cobble Hill TV, I’m constantly around fans and I’m often asked to speak. I can’t just show up being dull with a fake smile. When they hand me the mic, I need to have joy and energy that demonstrate that I love what I do.

LEB: We certainly felt that joy and energy from you at the CaringKind Golf Outing. Our guests told us over and over what a lovely, gracious, engaging guy you are. And you have the patience of a saint. That’s a special kind of personality and we are very grateful to have your support.

RD: Well, thank you, I appreciate that. But those are the rewards that I’m receiving now for the commitment that I’ve made to be the best that I can be and not just physically. I want to look like an athlete, but it’s more important to have an active, healthy brain that helps me appreciate the people I meet at these events. They’re generously willing to contribute to helping others. I love being in those situations.

LEB: It was a great day and so many of our guests returned to tell us they wanted to get more information and get more involved. You will meet many more of our great supporters at the CaringKind Alzheimer’s Walk on October 15th in Riverside Park. We will look forward to seeing you then and we thank you for taking time to talk with us today!

Ron Duguay is a former NHL All-Star. In his twelve-year NHL career (1977-1989) Duguay played for the New York Rangers, Detroit Red Wings, Pittsburgh Penguins and Los Angeles Kings. Currently, Duguay is a two-time Emmy award-winning broadcast analyst for MSG Network’s television coverage of NY Rangers games. He also appears regularly as both a hockey and lifestyle personality on network television throughout the U.S. and Canada.