In the week leading up to a big race, you find athletes bogged down with plenty of thoughts and questions: Have they been hydrating enough? (No.) Should they be eating more pasta? (Yes.) Is this the week to try out those new running shoes? (Absolutely not.) What songs make the final cut for their running playlists? (Beyoncé, clearly!) But for this 2017 United Airlines NYC Half, there was a new question on the table: Would they have to hurdle over snow banks in order to cross the finish line? (Maybe.) 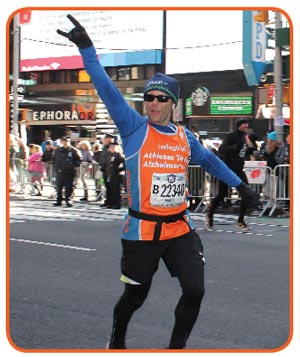 Just a few short days before this year’s half marathon, the New York City area was bracing for a major winter storm. While Snowstorm Stella would end up having more bark and less bite, the residual effect of sleet and ice still caused serious concern about what condition Central Park would be in come race morning. Fortunately, CaringKind’s Athletes to End Alzheimer’s® team was familiar with the world throwing unexpected curve balls their way and persevering through them. With so many of them having been caregivers themselves, they knew what resilience looked like. They were determined to complete the race in honor of those they knew personally the millions of other families in New York and beyond who are on the Alzheimer’s journey and need the types of programs and services that CaringKind has been providing for over 30 years. Together, the 50 member team raised incredible awareness for the cause, and over $130,000, which will directly help families in need immediately.

Over the course of the season, our runners become a team by sharing their stories, attending practice runs, communicating in a team Facebook group and cheering each other on throughout the race course. This year, the CaringKind team was also supported by a group of runners who had another special connection: colleagues working to come up with effective pharmaceutical treatments for Alzheimer’s patients. This year’s team featured 14 runners from Otsuka Pharmaceutical, which lists Alzheimer’s as one of their priorities for drug development. With the generous support of their corporate office, and their own fundraising efforts, they were able to fundraise over $33,000 this year. Otsuka’s efforts as part of CaringKind’s team highlighted their real commitment to support the Alzheimer’s community, which included searching for the cure while also actively supporting care.

A diagnosis of Alzheimer’s or dementia can be a real moment to pause for any family. But, as seen throughout this newsletter with George and Claire’s story, there are ways to move forward, including getting educated, taking more safety precautions, reaching out, accepting help and much more. And for our athletes, they take another step forward, literally, by grabbing their favorite pair of sneakers and taking on the streets of New York City. We’re all doing our part to help, whether it’s the staff members at the CaringKind office, the caregivers in their own homes, or the runners blazing through the car-free streets of Times Square. Let’s continue to keep moving forward.