...Athletes to End Alzheimer’s® all-stars! In May, between the TD Five Boro Bike Tour and TackleALZ NYC, our athletes raised over $200,000 to support our programs and services while proudly raising awareness for CaringKind.

The 2016 TackleALZ NYC players and coaches

On the first day of May, clouds and rains loomed, but that would not stop the 30 members of our Bike Tour team who were ready to brave the soggy, but car-free roads of New York City. Starting in downtown Manhattan, they rode through all five boroughs, before eventually completing the tour on Staten Island by the ferry. And while the rains were unforgiving on tour day, our team’s resolve remained intact because of their commitment to the cause and to those who live with or care for someone with Alzheimer’s disease. As the first Bike Tour team representing the CaringKind Athletes to End Alzheimer’s signature orange, they were proud to lend their bodies and voices to the caregiver mission.

Fast forward just two short weeks, and we would again be under the threat of thunderstorms while getting ready for another great night of flag football on Roosevelt Island. While this would be the sixth time this game was played, it would be the first under the newly rebranded event name TackleAlz NYC which further illustrates why these incredible women take the field, with the support of the amazing coaches who help them prepare. To embrace the inclusiveness that has long been one of the event’s greatest strengths, the teams changed their names to the BruCrew and the Blondetourage. 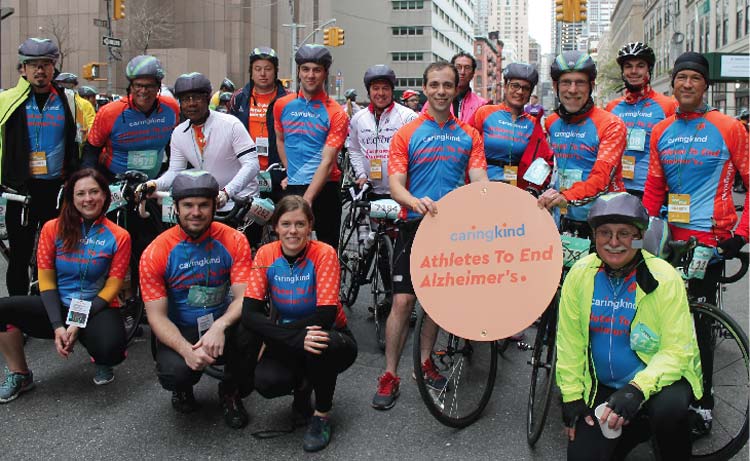 As game day started, the fans were ready to buckle down for the night. Would the BruCrew, who had impressively raised over $80K leading into the evening win back the trophy? Or would the reigning champs, the Blondetourage, who had for the second year in a row raised #100KbyGameday, be able to pull off the repeat? A physical but fair game played out for the crowd, and the game was too close to call all the way until the fourth quarter when the Blondetourage tied the score. But in that last quarter, a spark must have been lit because the BruCrew was able to light up its offense in an impressive fashion to score multiple touchdowns, giving them the lead and final game victory score of 47-20. But the most important score of the night was the one shared by the nearly 100 participants from both teams: over $190,000 raised to tackle Alzheimer’s. 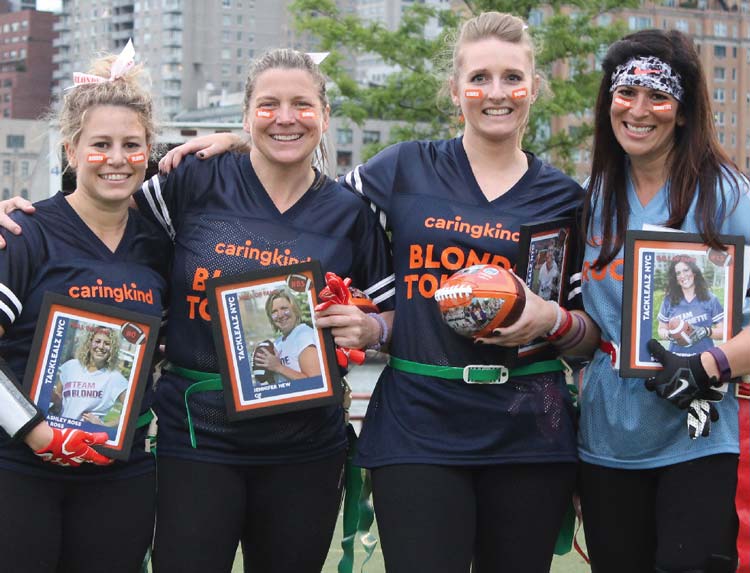 From left: 2016 TackleALZ NYC Hall of Fame inductees Ashley Ross, Jennifer New, Cassie Sklarz and Brie Corona-Galo. Each of these incredible athletes have raised over $10,000 in their TackleALZ NYC careers.

Throughout the season, the ladies and gentlemen of TackleALZ NYC have stood tall in the battle to destigmatize Alzheimer’s and dementia and shine a light on the over 250,000 caregivers in New York City currently tackling this disease in their day-to-day lives. From rookie to seasoned vet to “retired” alumni both near and far, they stand together as a community united to raise awareness and funds for our cause. On behalf of the CaringKind Board, staff, and, most importantly, our clients, we thank all of our athletes for their dedication and support.