It’s Summertime and Giving is Easy 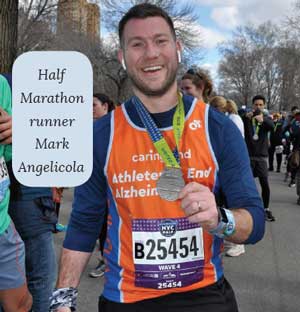 Congratulations to our 22 runners who raised nearly $50,000 as part of our team in the NYC Half Marathon! It was a cold day for spectators, but the weather was perfect for runners. Special congratulations go to our top fundraising individual, Karen Antell, and to our nine-member team from Otsuka Pharmaceutical, captained by our veteran runner Timothy Wojcik! It may have been a half marathon, but — to mix a metaphor — our runners made a full court press and we couldn’t be more grateful!

Congratulations to our 11-member team who rode through all five boroughs in the TD Five Boro Bike Tour on May 5th! They raised almost $20,000. It was a really wet day but our team’s spirit couldn’t be dampened. Special congratulations go to our fundraising power couple, Katherine Borsecnik and Eugene Weil who raised over $6,000 for Alzheimer’s and dementia caregiving. Bravo!

Congratulations to all 80 players and to our coaches who, together, raised $214,788 — a record-breaking amount! Game Day between Blondetourage and Brucrew was on Saturday, May 18th at Riverbank State Park. The weather was glorious. The teams had spent months practicing for this game and their efforts paid off. Over 200 spectators cheered for some pretty amazing plays. In the end, Blondetourage took home the winning trophy, with a final score of 40-13. Each team raised over $100,000 to support Alzheimer’s and dementia caregiving. And on that score, everyone’s a winner. 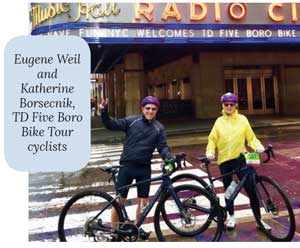 Congratulations to our favorite triathlete, Esther Birnbaum! Esther raised over $5,000 in support of Alzheimer’s and dementia caregiving. Unfortunately, because of the heat wave, the Triathlon was canceled. But Esther swam, cycled, and ran her way into our hearts all the same. Thank you, Esther!

The NYC Marathon is on November 3rd. Our team of 30 runners has already raised over $50,000! Congratulations to all!

Registration is officially open for our two Alzheimer’s Walks this fall! We’re walking in Brooklyn on Sunday, September 22nd and Riverside Park on Sunday, October 13th. You can walk and fundraise as an individual or as part of a team. Join us for either Walk as we celebrate caregivers and relive cherished memories in this joyful gathering to support research, caregiving, and advocacy!