Thanks to recent Hollywood films and widespread media attention, traumatic brain injury (TBI) and chronic traumatic encephalopathy (CTE) have become cemented in mainstream discourse. Still, the facts around TBI and CTE and their relationship to Alzheimer's and other dementias remain hazy. On October 18th, at the Times Center in New York, CaringKind provided some much-needed clarity at its 29th Annual Research Meeting, the first such meeting under the CaringKind name. 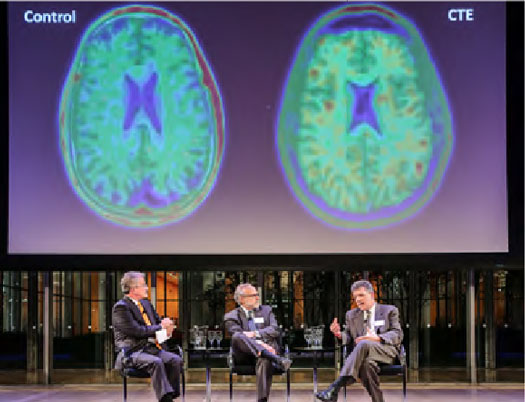 *Moderator Dr. Max Gomez and panelists Dr. Robert Stern and Dr. Sam Gandy discuss the differences between two brain imaging scans; the one on the right shows hallmarks of CTE.*

During her opening remarks, CaringKind President and CEO Lou-Ellen Barkan recounted a doctor’s tips for long life, one of which was “Don’t fall down.” The rule seemed simple, but after considering her roles as the mother and grandmother of athletes and the daughter of a veteran who suffered from dementia, she realized the rule carried immense weight. The panel she introduced reflected the issue’s magnitude.

Dr. Robert Stern is Professor of Neurology, Neurosurgery, and Anatomy & Neurobiology at Boston University School of Medicine. He also directs the Clinical Core of the BU Alzheimer’s Disease and CTE Center. His research focuses on the long-term effects of repetitive head impacts in athletes.

Award-winning CBS 2 Medical Reporter Dr. Max Gomez moderated and expertly charted a path through a complex and provocative discussion exploring the intersections and divergences between Alzheimer’s, CTE, and TBI.

Dr. Stern began by articulating the differences between Alzheimer’s and CTE. Both are progressive diseases that can lead to dementia. However, unlike Alzheimer’s, CTE has a specific risk factor: “a history of getting your head hit over and over again.” According to Dr. Stern, CTE research remains in “toddlerhood,” but steps are underway to “exploit the techniques” used to diagnose Alzheimer’s in order to diagnose CTE in living patients.

Dr. Gandy’s current work involves developing a visual biomarker for CTE in living athletes and soldiers. “One of the attractive things about studying TBI,” he said, “is that we know when the injury happens,” so doctors can develop ways to target the pathology almost immediately. On the issue of advancing the science, Dr. Gandy drew a comparison “to the way the Alzheimer’s field moved forward,” namely through Alzheimer’s research centers that continually examine and characterize patients.

The panel concluded with Dr. Gomez asking a question that brought a sometimes-clinical discussion to the concern of every parent in the room: “Would you let your kids play football?” Both panelists responded in the negative, but, as is often the case when discussing TBI, there were no easy answers.

The night drew to a close with CaringKind’s Executive Vice President, Director of Programs & Services Jed A. Levine sharing some of CaringKind’s exciting initiatives. Among them is UsAgainstAlzheimer’s, a grassroots “mobilization of forces” from all walks of life pressing for urgency from government, industry, and the scientific community. Mr. Levine ended the evening with an impassioned plea for the audience to keep the pressure on their elected officials by asking them directly, “What are you doing about Alzheimer’s and dementia?”

James Campbell is a freelance writer based in New York City. He holds an MA in International Affairs from The New School and has written for various academic, nonprofit and human rights organizations.