How do you know which charities to donate to? Charitable giving, which in the old days used to be directed by word-of-mouth recommendations and donations to your local church, is now a much more challenging minefield. Charities are increasingly involved in awareness campaigns, there are complex networks of cause marketing, and social media has changed the landscape indelibly. Charities of all sizes are using social media campaigns, from YouTube videos, to Twitter, Facebook and others, to engage goodwill and awareness for their corporations. More information is put in front us than ever before, but the question is, how do you know if your charitable donations are dollars being well-spent on the cause(s) you care about? 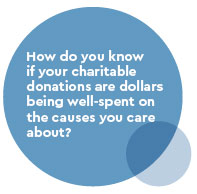 There are several services, places you get information from, and things you can do to better inform yourself and determine if your money is being mostly spent on the charity’s ‘mission’ i.e., how effectively is the charity in carrying out its mission. One of the first places you can look to search for a charity is GuideStar.org, where you can access the organization’s Form 990, the basic I.R.S filing document for nonprofits, for each year. The Charities Bureau of the New York State Attorney Office is another place where the charity’s Form 990s are made universally available to the public. You can simply run a search for the charity’s name on its website, www.charitiesnys.com, and access the filed Form 990s for every year of the organization’s history. When it comes to larger charities, the information available on the Charities Bureau website is unique. Not only are the Form 990s available, but if the charity raises more than $500,000, it is also required to file audited financial statements with the New York State Attorney General, that are made publicly available on the site as well. This threshold is slated to change to $1 million by 2020. 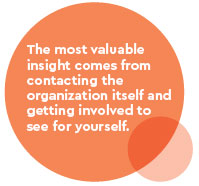 While somewhat daunting, the Form 990 has a host of information on the organization’s financial health and governance. Besides the summary of the basic financial information on the first page (revenues and expenditures), the second page is key. Before donating, the first thing you want to know is “What is the Charity’s Mission?” For instance, charities may be committed to the same health issue, but may support different focuses such as scientific research, promoting public awareness, or providing patients with care and information. The next question you should be asking is “How Effective is the Organization in Carrying out its Programs in Support of that Mission?” Page 2 of the Form 990 (Part III) is where you need to look. It describes the organization’s mission, its efforts to achieve the mission and the resources devoted to it. On page 6 of the Form 990 (Part VI) is a series of questions that inform you about the organization’s governance, including its governance structure, the size of its Board, and if governance decisions are delegated, among others. Importantly, it lists how many independent Board members there are, a key indicator of good governance to start with. On page 7 (Part VII), the Form 990 also provides detailed information on the names and compensation of officers, directors, key employees, and highly compensated contractors. The Form 990 also provides you with other relevant information, including whether there have been any serious issues or problems at the organization, which would be disclosed on one of the schedules at the back. All of this information allows you to make your own assessment and judgment about the charity.

There are, in addition, several independent organizations that do the work for you. Charity Navigator evaluates nonprofits based on their financial health, accountability, and transparency, including how the charity will use its support today, how well it has sustained its programs and services over time, and its level of commitment to being accountable and transparent. After evaluating this information, it gives them star ratings accordingly, with four stars as the highest rank. Another group is the BBB Wise Giving Alliance, affiliated with the Council of Better Business Bureaus, which has free review of charities. Applying 20 accountability standards, the alliance will specify whether the charity meets the BBB standards or not.

Of course, you can conduct your own due diligence beyond the Form 990 and ratings by reviewing the charity’s website, its publications, annual reports, and news reports. The most valuable insight, of course, comes from contacting the organization itself and getting involved to see for yourself.

Daniel Kurtz chairs Pryor Cashman's Nonprofit + Tax-Exempt Organizations Group. As the former Assistant Attorney General-in-Charge of the Charities Bureau of the New York State Attorney General's Office and co-author of one the leading treatises of New York Nonprofit Law, Dan has earned a national reputation for servicing the full range of needs of his nonprofit clients. In his role, he advises on corporate and governance issues; sponsorship and charitable fundraising opportunities; endowment administration and investment; indemnification; and charitable solicitation laws along with an array of exempt organization tax issues. In addition, he regularly handles business combinations, including joint ventures, sales of assets, mergers, consolidations and sophisticated reorganizations and restructurings for his nonprofit clients. Dan has also conducted numerous internal investigations and handled litigations brought by civil enforcement and regulatory authorities against nonprofits, playing a key role in many groundbreaking cases in this area.

Shveta Kakar is a Partner in Pryor Cashman's Nonprofit + Tax-Exempt Organizations Group. She advises nonprofit clients on governance issues, counseling them on matters that could potentially ripen into government investigations or litigations, and conducts internal investigations and also represents them in governance disputes and in investigations by civil and regulatory authorities. She routinely advises Boards on their duties and responsibilities, the legal framework governing nonprofits and maintaining tax-exempt status, and counsels them on conflicts, internal controls and crisis management. She has written and spoken extensively on these issues.