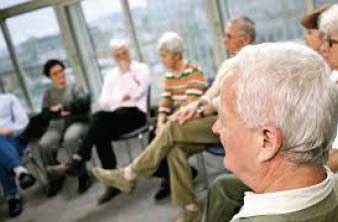 When Ben Schultz, a man in his late 70s, joined a support group, he expected that his wife would be the focus of the group’s attention. But he soon learned otherwise. The members spoke about their own difficulties, about what caring for someone with dementia was doing to them. And for the first time in four years of looking after someone, Ben admitted that he, as much as his wife, had changed. His even-keeled nature was cracking; he had become increasingly irritable, even occasionally snapping at his wife. He slept less, ate more, and the weight he put on led to back pain and sleep apnea. His concentration suffered and he began making mistakes at work. But what distressed him most was his own intermittent apathy. He found himself at times not caring about anything, which is decidedly not what a caregiver ought to feel.

He tentatively admitted all this to the group, concerned that its members would judge him. But, of course, he was met only with sympathy and understanding. Everyone knew what Ben was feeling because everyone in one form or another had been there. Then someone asked him what was he was doing for self-care. The question threw him. The concept of self-care was foreign to him. What did it have to do with his life? He had responsibilities, his wife relied on him, and his children depended on him to keep the family together. Just the thought of self-care made him feel selfish and guilty.

Although the group did not push him, it wanted him to know the benefits of self-care. All the members testified how self-care kept them from either unraveling or becoming completely detached—how, in fact, it made them better caregivers. They asked him to consider what brought him pleasure or made him feel replenished. At first, Ben had no idea. His adult life had been spent taking care of others. In fact, his self-worth and identity were inextricably tied to his caring for other people. It was what he expected of himself.

Nonetheless, after joining the group, Ben began to think about what he used to enjoy before Alzheimer’s had struck his wife. One night, he pulled out some old comedy albums he had loved while growing up, vinyl records with riffs by Bob Newhart, George Carlin, Carl Reiner and Mel Brooks. At the next meeting, he told the group that he had actually been startled to hear himself laugh out loud. It reminded him, he said, of his old self when he still had some life in him. A few meetings later, he hit the group with a shocker: He was going to join an improv class. The members spontaneously burst into applause, and Ben was so touched by their happiness that it dissipated any guilt he felt for finally choosing himself over his wife.

So Ben joined the improv group and suddenly a whole new community opened up to him. Here were people who enjoyed comedy, whose purpose was to find humor even in the darkest places, and the laughter they evoked in him, as well as laughter he less often evoked in them, recharged him. The sense of hopelessness and isolation he had been carrying around began to lift, and so did his depression. He began to make doctors appointments for himself. He focused better at work and when he came home, he was less impatient with his wife. Only by practicing what the group had “preached” did he come to appreciate how linked his own care was to the care he was able to provide for his wife.

Self-care, he realized, was something deeper and more challenging than simply allowing pleasure into one’s life. It entailed reacquainting oneself with what gives life purpose. So Ben experienced for himself what the research on caregiving bears out: Being a caregiver is a liability to one’s physical and mental health because along with the stress of caregiving comes a higher risk of developing a dementia disorder.

Today Ben serves as an example for new caregivers, teaching them what his group taught him: Self-care is not a luxury; it is a way of protecting oneself in order to protect others. It is both a gift and a shield.