Thanks to modern medicine, many people will survive into old age even if they remain sedentary, but it is unlikely that they will remain fully healthy and avoid cognitive decline if they aren’t as physically active as their abilities and conditions allow. Healthy brains shrink and work less efficiently as we get older, but the rate of cognitive decline is variable, and there are actions you can take to slow down the process and remain as mentally fit as possible.

Exercise improves cognitive functioning and lowers the risk of developing Alzheimer’s disease in the aging brain.

In 2019 the CDC found that nearly half of U.S. adults over 45 years of age have poor cardiovascular health, hypertension, obesity, and/or diabetes. These conditions are modifiable risk factors for cognitive decline and Alzheimer’s disease (AD). Increased physical activity appears to have the most impact on reducing the risk of cognitive decline because it directly impacts brain health. 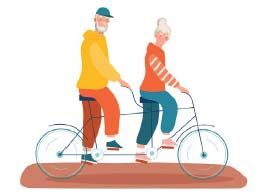 Physical activity improves both cerebral blood flow and the brain’s executive functioning, and some research suggests that it may also reduce amyloid and tau levels in the brain, the two hallmarks of AD. In contrast, there is evidence that sedentary behavior has a detrimental effect on the brain because it leads to decreased circulation, and poor circulation compromises the ability of cells to produce the proteins that stimulate the formation of blood vessels and new neurons in the brain.

There have been a wide variety of controlled clinical trials over the past 20 years that measured the effect of exercise on brain health. The physical activities involved ranged from walking, jogging, moderate cycling, gardening, dancing, and Pilates, to more vigorous sports and resistance exercises. The studies varied in duration, but all the studies reported improvements in cognitive functioning in the exercise group, and, where before and after brain scans were administered, the exercise group had increased gray matter volume in the hippocampus and in other areas of the brain related to cognitive functioning. 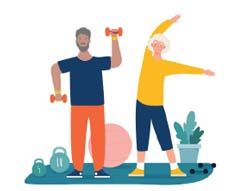 There is no prescription for the ideal amount and type of activity necessary for staving off memory loss, but there are general exercise guidelines that are a good beginning. For adults aged 65 and older, the CDC recommends at least 150 minutes a week of moderate intensity activity such as brisk walking, or 75 minutes a week of vigorous intensity activity such as hiking, jogging, or running.

They also recommend at least 2 days a week of activities that strengthen muscles, and regular activities to improve balance, such as standing on one foot.

Engaging in regular and appropriate physical activity has clearly been demonstrated to safely improve physical and mental functioning, even for older people who are frail and for people living with long-term conditions. Physical activity can be both preventative medicine and a therapeutic agent. Take the advice of an 82-year-old competitor at the 2022 National Senior Games track-and-field event in Miramar, Florida. He said, simply, “You got to keep moving.”

Dr. Butler is a psychoanalyst in private practice in New York City who works with individuals and couples. She is a support group leader with CaringKind where she runs a group for adults who are caring for a parent with Alzheimer’s disease. She has written eight books and several articles, and she is also a docent at the American Museum of Natural History in their butterfly vivarium.